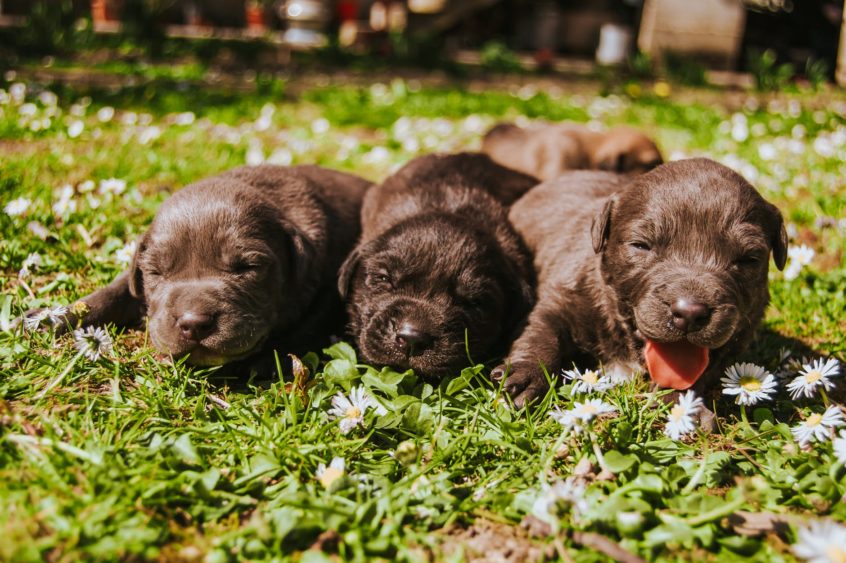 As a proud puppy mom or dad, one of your top priorities is ensuring they grow up to be healthy and strong. You also want them to be happy and well-behaved. It’s important to socialize your dog from a young age so that you can ensure they are friendly, confident adults ready to take on the dog world.

When trying to socialize your puppy, the best window of time is between 3 weeks old and somewhere around 16 to 20 weeks old. Exposing your puppy to all new sorts of things (like sights, scents, sounds, sensations, people, and other dogs) at a young age will prevent her from being fearful from those same environmental cues later in life. Without proper socialization, you’re potentially paving the way for anxiety, fear, and aggression later in life when your dog is introduced to unfamiliar things.

Puppies should be introduced to a lot of different people. A great way to do this is by allowing different people to handle and cuddle her every day. The contact should range from gentle to firm handling, but be sure to hold her in different positions and touch her feet, ears, back, and so on. This will help her with handling and meeting new people.

Have you ever been around a dog that is nervous during a thunderstorm or while someone is vacuuming? It’s likely because they were not exposed to those noises as a puppy. Don’t overwhelm her with too many sounds at once, or ones that are too loud, but she should be familiar with loud traffic, the noises children make (crying, playing), music, a loud television, and so on.

Dogs can become aggressive when they are eating and people get close to their food bowl. It’s typically because they weren’t socialized and they are anxious about someone potentially trying to take their food. To teach her not to guard, approach her bowl while she’s eating and drop in a treat, then leave. Do this a couple times per meal until your dog is excited about your approach.

If you fear your dog will be anxious when you leave home, you can socialize them to prevent this. While it’s important she meets a lot of new people, she should also have some alone time so she can learn to be separate from others. When you leave, provide something savory for her to chew on so the distraction desensitizes her to your absence.

Confrontational approaches, domination, or roughhousing can breed aggression in puppies. Reward good behavior and calm energy, and prevent/discourage bad behavior. Similarly, if your puppy bites you during play, you shouldn’t yell at her, hit her, or doing anything else to scare her. Provide appropriate chew toys, and when puppies are under 5 months, you can participate in “play biting.” If she bites too hard during play, a loud “ow” followed by ending the game will teach her that she is biting too hard. A firmer approach might be needed for rough and stronger types of dogs and breeds, but a professional dog trainer should be sought out for this specific training advice. If you are discouraging the chewing and it’s not getting better, consult a professional.

Dogs can be socialized later in life, but it’s easier to socialize them at a younger age. While it’s important they’re introduced to people, they also need to be introduced to other dogs. One of the best ways to do that is at a safe environment with trained professionals, such as at dog daycare or boarding. Dogs can build confidence as they develop around other dogs so that their sensitivities don’t increase as they age. Dogs typically need to be at least 8-10 weeks old before they can attend daycare, which is the perfect window for effective socialization development.

At Fetchers, we have a staff of breeders, veterinary technicians, and seasoned trainers. We can help guide you and provide the options you’ll be looking for to raise your confident, socialized, and well-mannered pup!